Windows 10 in January posted its second-largest single-month increase in user share, when its works-

percentage points last month - almost twice the increase of the month before - to end January at 57.1%, 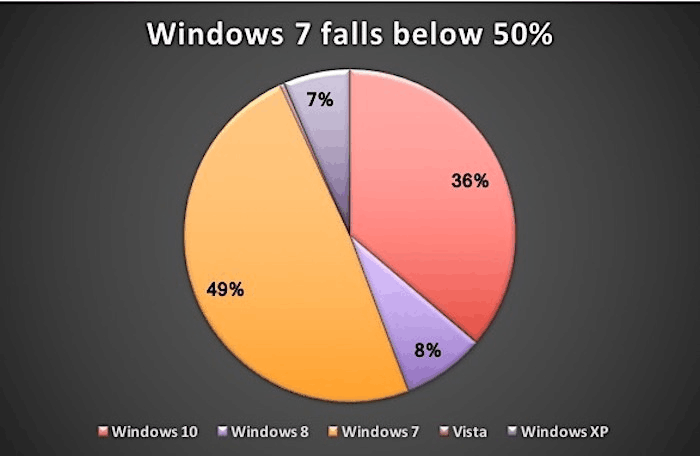 Microsoft retired Windows 7 three weeks ago, on Jan. 14. Although the Redmond, Wash.

firm delivered the final general security updates to customers then, businesses can purchase

The now-retired Windows 7 finished January - and its allotted half a score - with a 25.6%

share of all personal computers, down a whopping 4 percentage points (also the second-largest

decline ever in one month), and at 29% flat for those systems running some kind of Windows.

Windows XP had when it wrapped up its long run in April 2104. Warnings by Computerworld

that a greater portion of Windows 7 would remain at its retirement were ultimately unfounded.

Those warnings were based on forecasts cranked out with the average of the most recent 12 months.

In for a penny, in for a pound: The latest prediction pegs Windows 7 declining by more than a

point each month, meaning the OS should slide under the 20% of all Windows PCs bar in September,

There's little reason to question those dates: Windows XP did the same, falling below 20% of all

By those same milestones - September and December - Windows 10 should account for 76% and 80%,

respectively. Those numbers may seem unreasonable, but because Windows 10 won't be sharing share

with any follow-up, as have earlier editions of the client software, it's certain that the OS will ultimately

own all of Windows on the desktop.

Speaking of all of Windows, elsewhere in Net Applications' data, Windows 8/8.1 added one-tenth of a

percentage point, climbing to a 4% share. A year from now, the OS flop will have slid to 2.8%. (Side

Apple's macOS has been making inroads the last few months, chewing up some of Windows' share.

Or so Net Applications' data was saying.

"Due to changes made to the user agent in iPadOS 13, iPads were identified as macOS devices,"

the California metrics vendor wrote on its website. "This change propagated progressively from

September to December and required an adjustment to the data in that timeframe."

By miscounting iPads running iPadOS 13 as Macs, Net Applications overestimated the share of

macOS. The differences between the contemporaneous shares and those adjusted to remove the

From September to November, macOS' adjusted shares were similarly lower than the originals.

In January, macOS added six-tenths of a percentage point to climb to 9.7%. And because share was

zero-sum, never more than, never less 100%, when macOS was incorrectly boosted, Windows had to

Windows went from 86.8% (as originally reported) to 88.7% (after adjustment); in November climbed

Whokeys shares regularly the latest Games and Microsoft activities every week, including our website general activity and giveaway activities. Whokeys provides customers the greatest benefits with the utmost sincerity. Don't forget to keep an eye on our weekly Activity News for more information.